We started a podcast! OOPS NL The following is a transcript of the OOPS NL podcast, episode #1 For just the audio: https://oops.blubrry.net/2019/06/21/oops-the-podcast-june-21-2019/ For the video on Youtube: Link can be found here OR https://www.youtube.com/watch?v=UNT-fKT8fQA&feature=youtu.be Hi I'm Vickie Morgan Host of Ounce of Prevention. Also that's shortened into O O P S Ounce of Prevention show just who whoops we're off to a great start. Actually this is the third time I've started it.   The first time I didn't have pants on and the second time I farted. Don't want to make it too real too soon. So this is Ounce of Prevention. Ounce of Prevention actually started three years ago in Maine where we were living and I started doing some stuff for public access stations and started doing my own production with my own cameras, editing myself, etc. So I did a season in Maine and then I did a season that I shot in Canada at the ECMA. And then I moved home. As a
Post a Comment
Read more posts...

So you want to talk about mental health

- May 21, 2019
Have you caught that show on cable lately about mental health and the chick doing the interviews is like mentally ill? Not like sittin naked in the bath tub rubbing feces on herself but like legit PTSD. She had a kid that died I think or some shit like her Dad didn’t hug her enough. She used to be my roommate so I overheard her on the phone talking about it. That’s how we talk about mental illness. Those are direct quotes from different people.  I published a book about how I “got” PTSD and my mother-in-law posted a review on Amazon that said anything negative in there about her was due to my mental illness making me remember stuff wrong. That’s how we talk about mental illness. When a guy back in Newfoundland started a charity for mental health I sat my oldest son down and told him all about it. He wanted to know what mental illness meant and I said it’s like stuff in your mind that you can’t help, like being sad but for no reason, or worrying all the time when there
1 comment
Read more posts... 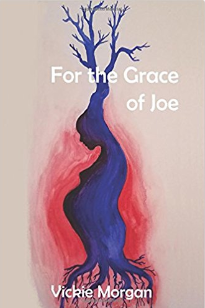 For the Grace of Joe is now available in most countries on Amazon. For US orders go to Amazon for the ebook or paperback. Canadian orders can be placed directly with MPower Books. The total cost is $22.00 Cdn (shipping included) and payment can be made by e-transfer or Paypal to mpowerbooks@gmail.com This book was written for families who are where we were. You are not alone. Cover art:  Steven Hoke
Post a Comment
Read more posts...

Life will never be the same

- February 09, 2013
I'm currently 24 weeks pregnant.  Seven weeks ago we had a routine ultrasound.  It was the first time in my life that I didn't lay awake worrying about what they'd find.  I'm going to call that my last night of peace.  On the way to the hospital we joked about having the doctor write down the baby's sex and sealing it in an envelope.  We would open it only if we both gave the launch sequence. An hour later I was asking my partner if we could find out so we could name the baby in case the room full of specialists' predictions came true. Let me back up a little. December 28, 2012 The ultrasound technician wasn't saying anything during the scan.  I was asking what we were looking at and telling her what I had just learned in Biology 101 in university.  She wasn't really smiling or responding so I said are you seeing ten fingers and toes on there? She zoomed in and showed me the baby's left hand and said yup, there's a little thu
Post a Comment
Read more posts...

- February 09, 2013
January 4, 2013 We considered getting a second opinion.  Maybe go to Boston or to the Catholic hospital in town so maybe they wouldn't be so quick to offer an abortion. We have already been to the best facility in the state.  If we went to a less-equipped place, they would refer us right back to where we had gone already.  Boston would tell us the same thing.  We needed more information and despite our vow to never set foot in the hospital again - we went back. There's a blood test they can do on me called MaterniT21.  It's only being performed by a lab in California and it takes two weeks to get the results.  It's intended to look for Trisomy 21 which is Downs Syndrome.  When the baby's blood cells break down, some of the dna material comes out in my blood.  They can also look for Trisomy 18 (Edwards Syndrome) and Trisomy 13 (Patau Syndrome). According to the internet : This test is most accurate at detecting T21 (Trisomy 21).  A little less
Post a Comment
Read more posts...